Just on a whim, I decided to call the current version of multich v1.8. There's a ton of bug fixes and improvements to features; easter eggs, etc. Keep in mind that v1.8 is still an alpha or beta, simply meant to show that federated textboards are feasible. If you are interested in trying multichan as a sysadmin, definitely grab this

they falsely claimed that they achieved the first federated clearnet-tor fediverse connection[1] for anonboards on 20210621 when Multichan is demonstrated as providing clearnet-tor federated on 20210525[2], via github, almost one month prior. In the ``fake news" post typical of the Fchannel `administrator' it is claimed that the developer's connection between clearnet is the "first ever" connection between hidden services (tor) and clearnet .

0chan is the sole node that federates with the `illegal' tor instance of our software. However, due to our strict policies[3], but we (admin) @ 0chan.vip try our best to remove all illegal content from the content that appears our network

>btw, everyone go troll our main competitor fchannel!!
Not your personal army, b0red w0rz are for insecure losers

>>0chan/3
you raise a good point ... Kareha[1] and other so-called `textboards' also have image support. They even allow image uploading.

> are imageboard and textboard the same?
Although multichan doesn't fully conform to the standards of an imageboard, fchannel also deviates in two ways: different tripcode algorithm and random post numbers. Both softwares allow people to post anonymous, registration-free comments, with or without images. I call multichan a textboard because the focus is on discussions rather than media uploads; hence, simple sequential numbering in threads + no (obvious) way to attach images to posts.

Wrote my comment shortly before resting on an incredibly hot day; apologies for the poor post quality, &c

>textboard
Excuse my autism, but I'd like to Falcon Punch whoever came up with that stupid term. These are all ultimately Japanese-style bulletin boards, and the Japanese terminology is simple:

In grorious Nippon, the term "bulletin board" is all-encompassing, and Japanese bulletin boards often support image uploads. "Imageboard" is mainly used for bulletin boards that are centered around the concept of uploading and viewing images, but can also describe any form of bulletin board with image upload/embed capabilities. All other attributes and gimmicks (like trips, post numbers, anonymous posting, etc.) have no effect on the definitions, and are often just config options that can be enabled/disabled as the admin chooses.

TL;DR: Multich is a bulletin board, Fchannel is an imageboard, and all imageboards are bulletin boards. The artificial "textboard"/imageboard dichotomy should be thrown in the trash.

I would justify the term `textboard' for 2ch-like software as a contrast to Futaba, Yotsuba, Wakaba, and the rest. Most everyone can agree they are imageboards. What is a BBS? BBS is vague and could narrowly mean those things you connect to over dialup, or the term could be stretched to include stuff like USENET or phpBB.

``perfect is the enemy of good" -- voltaire

Maybe better terms would be like 2ch-style, futaba-style, danbooru-style, et al. You can't exactly call 2channel an anonymous board (anon bbs?) because some boards have IDs, some people use names, others use tripcodes....

If only we knew who to blame for promoting the meaningless term known as ``textboard''... some mysteries will just never be solved. Maybe we can blame that https://textboard.org/ guy.

>What is a BBS? BBS is vague and could narrowly mean those things you connect to over dialup, or the term could be stretched to include stuff like USENET or phpBB
It's not vague, it's just an all-encompassing term like "vehicle" or "software". All of those examples are considered bulletin boards in one way or another - guess what the "BB" in phpBB stands for!

>Maybe better terms would be like 2ch-style, futaba-style, danbooru-style, et al
That's not a million miles away from what the Japanese actually do.

"2ch-style" boards (AKA Amezou-type boards) are often called just that, but they're also commonly known as "thread float-type bulletin boards" ( https://ja.wikipedia.org/wiki/スレッドフロート型掲示板 ). "Thread" because every post has its own reply thread, and "float" because a thread will "float" (bump) to the top of the board when a new reply is made. Another term for the same concept is "res-type" (レス型), meaning "response type".

"Futaba-style" boards are simply known as image bulletin boards / imageboards as mentioned above, and they are a form of thread float bulletin board. The Futaba/4chan style that most of us are familiar with isn't the only form of imageboard, but it's one of the most common thanks to the popularity and influence of those sites. That particular style originated from a script first released in January 1998 called "imgboard", which - according to the makers of imgboard ( http://www.big.or.jp/~talk/t-club/soft/mini_r6/index.cgi ) - is supposedly where the term "imageboard" derives from.

Fun fact: Futaba actually used the imgboard script for a short while before switching to gazoubbs. Gazoubbs was pretty much identical in terms of looks/functionality to imgboard, but it came out a couple of years later and was written in PHP instead of Perl. Probably sucked less in terms of performance too.

>You can't exactly call 2channel an anonymous board (anon bbs?) because some boards have IDs, some people use names, others use tripcodes....
"Anonymous BBS" is another one of those Western-only labels, although it's less redundant than "textboard". The Japanese don't explicitly make reference to the "anonymous" aspect when referring to the various types of bulletin board, and as you say, they're not inherently anonymous either. In fact, many Japanese bulletin board scripts/services come with options to force users to fill out the name field before their post is allowed to go through!

Anonymity was definitely a large component of the whole Internet "underground" movement in Japan (https://ja.wikipedia.org/wiki/アンダーグラウンド_(文化)#インターネット ), and a lot of the derivative cultures (like 2ch and Futaba) inherited it this way. However, there's always been Japanese bulletin boards out there that have opted for pseudonymity instead. It has more to do with an individual board's culture than anything regarding the board format itself.

>If only we knew who to blame for promoting the meaningless term known as ``textboard''... some mysteries will just never be solved
Probably someone from 4chan a long time ago. 4chan used to have both Futaba-style imageboards and 2ch-style discussion boards, and the latter were sometimes referred to by the users as "textboards" to differentiate them from the imageboards (the actual site itself however just referred to them as "discussion boards").

The term "textboard" admittedly makes some degree of sense in that context, but using it to describe Japanese bulletin boards as a whole - as if there's some hard distinction between IMAGEBOARDS vs TEXTBOARDS - just doesn't accurately describe the reality of the situation. 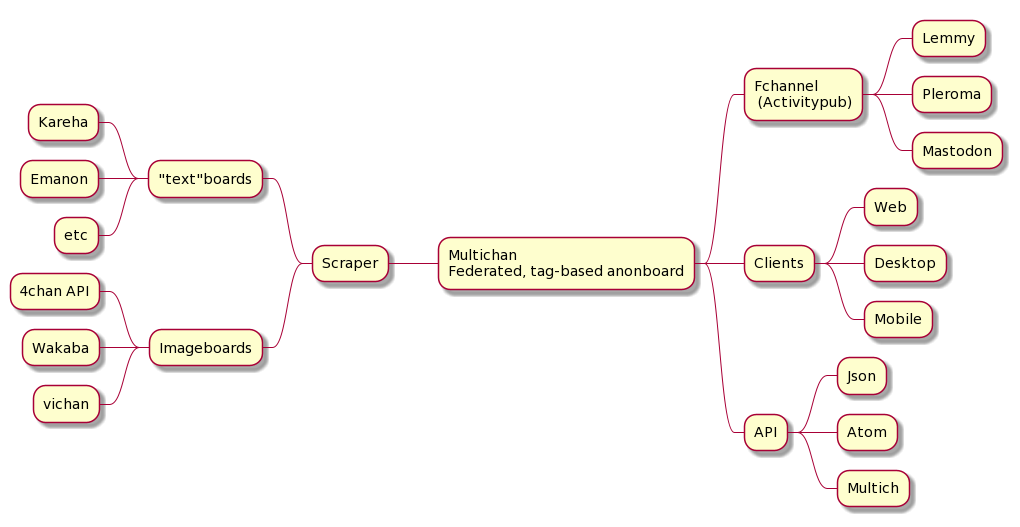 >Hell, Shii and Waha were calling them textboards back in 2004/2005 weren't they?
I believe they mostly just used "bulletin board", "anonymous BBS", "2ch copy", and other words to that effect.

Take http://shii.bibanon.org/shii.org/knows/2channel.html for example:
>My thread from August 2004, Something Awful Forums.
>Big-boards.com is a compilation of all of the most popular bulletin boards. BBSes, like this one I am talking on, are a quirky invention of first-world nations, and especially geeks and nerds from first world nations.
>2channel, from what I've heard, is so big that people hardly ever browse the forums there. Instead, they bookmark their favorites, and people who post mainly in one forum don't know much about the people from the other forum. But as one big BBS, they are bound together with a unique culture.

I've yet to find a dated example of anyone saying "textboard" or "text board" prior to 2006, and those early examples are all regarding sites that had both Futaba-style boards and 2ch-style boards, like 4chan and world2ch. The vast majority of instances I've found are all 2009-2012 and beyond, which is around the time that people - mainly outsiders looking in - started writing essays and news articles on all this crap.