On my list right now are:
> reply system that supports federation
> anti spam features
> adding div and span and css blah blah blah
> making it easy for people to set up their own multichan
> import threads from kareha and emanon etc textboards

Any other features that would make multich better? like [code] or [no bump], [poll] or things like that.... tripcodes? IDs?

I could also make a #multich IRC channel or Mastodon bridge...

All three of those also sound like good ideas. To add on top of that id like to suggest a view that lets us see the last post or two in a thread.

Right now the current >>reply system only works if the reply is formatted like >>http://0chan.vip/3 or >>2 at the beginning of a line.

>>1,4 I suggest captcha on same page too

>>0chan/5
Well, now the site will show a "please fill out the captcha" message instead of a reply form.

>>0chan/3
> option to set maximum characters in a comment
You mean that the OP could set a character limit for replies to his thread? It's an interesting idea, but I don't think it plays well with federation.

The admin of a board can set a site-wide character limit. This is 10,000 by default, like dis.tinychan.org uses.

I like the background color a lot, but could you make the posts less saturated? I like the way the site looks... for the most part. I like the elite club feel, as well as the playing cards casino references. Maybe make the posts a nice neutral (not saturated) yellow, like ochre yellow... just more white. Or nah, keep it green and turn the saturation down. it does look nice.

NO TRIPCODE
OPTION TO <CENTER> THE WHOLE SITE

NO TRIPCODE < why not? are you going to say forced Anonymous next? Are you secretly Shii?

Maybe support for multiple sortings in the index? I'm not a big fan of sorting by latest bump.

>>0chan/7
>center the whole site
I know it would be bad but I kind of have this temptation too.

>>0chan/13
Once I add ATOM feeds[1] it'll be pretty easy to make a bot that tweets whenever a new thread is created (especially on Mastodon/Pleroma).

I just noticed that the <title> tag does not reflect the thread subject so it gets messy if you start bookmarking thread.

I haven't added an admin panel yet, mainly because other people aren't running multichan servers or, if they are, they haven't reached out.

For fun, as a side project, I'm thinking of writing an ayashii world clone (see https://i.imgur.com/wfMX60O.png ). Ayashii World is very Brutalist but what's interesting is that discussion threads are trees, rather than a chain.

Tags + trees + federation could be fun... 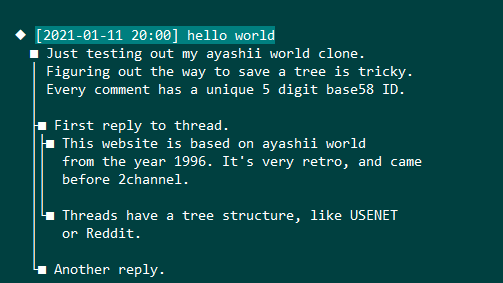 >>0chan/16
seems interesting, but this has the incredible issue of having a 4chan-derived userbase

>>0chan/16
Why not just use ATOM feeds or JSONfeeds?

JSONfeeds are pretty nifty; check out this article:
> Mapping RSS and Atom to JSON Feed
https://jsonfeed.org/mappingrssandatom

NNTPchan dev says it was a pain to moderate.

HTTPS for hiding your footprint from ISP.

add a #top / #header and #bottom / footer anchor to quickly reach the top and bottom of a thread.

The numbering is kind of confusing. Maybe it'll make sense eventually, but why not have a universal numbering system among multiple instances?

SO WHERE IS MY AYASHII SCRIPT MADE WITH MAGIC?

>>0chan/29
this is a textboard so image uploads don't make sense. The closest that may happen would be a "link" field that auto-imbeds images from certain domains such as imgur or wikimedia ...

Added new features to 0chan.vip -- from a tag's page, you can create a new thread with that tag (or tags). This makes the tags page feel a little more like a standard subforum.


>>12
Cool gonna add this to the #ripirc bbs too, neat feature anon.


>>11
I'm gonna play around with the catbox.moe api and integrate it. Uh, someday...

Thinking of adding a cookie for the "author" field next.

>>0chan/25
It's coming for multichan, slowly but surely.

It'll extend on top of the current multichan interface, but have two themes, ayashii and craigslist. Ayashii will be my take on sites like http://ayashii.net/ ( https://github.com/kuz-sysadmin/ksphp-en/ ); craigslist will just be craigslist colors on top of my ayashii-multichan frontend.

>>9
May add json feeds. May also add feeds for threads and for all recent comments.

>>0chan/19
0chan has this now: https://0chan.vip
This was never a software side issue.
Your web server (nginx, apache, lighttpd) should handle your SSL.

add an option such as:
・click here to turn [text] links into [clickable] links

cool new feature:
http://0chan.vip/api/ shows how the "database" is accessed

https://0chan.vip/friends shows what the allowed image URL host(s) of a server are, if remote image embeds are enabled

A /stats/ page is in progress.

It will later sort the friends by the number of each threads each one has.

>>0chan/10
> Maybe support for multiple sortings in the index?

This will come later:
> sort by reply count
> sort by most replies
> sort by last bump

Along with:
> +OR, ~AND, and -Exclude Tag operators

if multichan is so great... why doesnt it run on a plan9/ 9front/ inferno node?!

Finally, the feature everyone's been waiting for: a DQN date tool!

>>local/1
it runs perfectly fine on inferno because inferno is intended to be ran in a virtual machine that can access host filesystem as specified. you're telling me you don't use the inferno Limbo multichan desktop client? do you have autism?